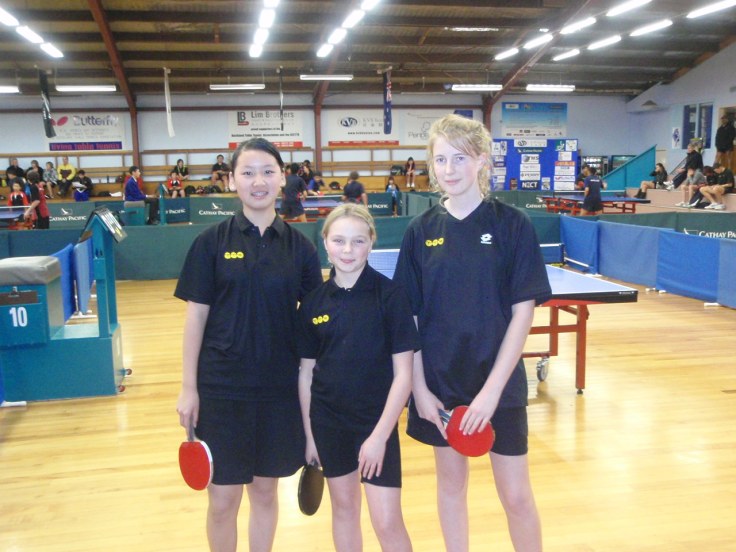 Wellington made a good start in the Under 15 girl’s ‘A’ grade competition with a 5-0 win against North Harbour ‘B’ .  11 year old Angela Chapmen recorded her first victory at National level pairing with Maddy Nash in a 3-0 doubles win and then defeated  Iris Liu 3-0 to make it two wins.

In the new U/13 team events Wellingon ‘B’ were narrowly beaten by Waitemata ‘A’ 3-2. Mats Olsthoorn performed well teaming up with Ben Westenra to win a doubles and also won his singles match.

In the U/18 Boys team event Wellingto played  Auckland ‘A’ with Thom Nguyen recording a 3-1 victory over Z Cheng.  Thom  also had a very exciting  5 set match with Lingnan Kong , where he led 2 sets to nil but unfoutunately lost 3-2. Delano Lam lost 3-0 against Oliver Scarlett and Jeffrey Chin lost 3-1 to Oliver Scarlett. Auckland also won the doubles and Wellington lost 4-1.

Overall Wellington Team Manager Russell Stoupe commented ‘It’s been great to have so much support from the other parents that are here. Everyone is working incredibly hard to look  after the boys and girls which is enabling the team to play to their full potential. Looking forward to some great matches through the coming week.”