Thanks to Malcolm Wong for another player profile! 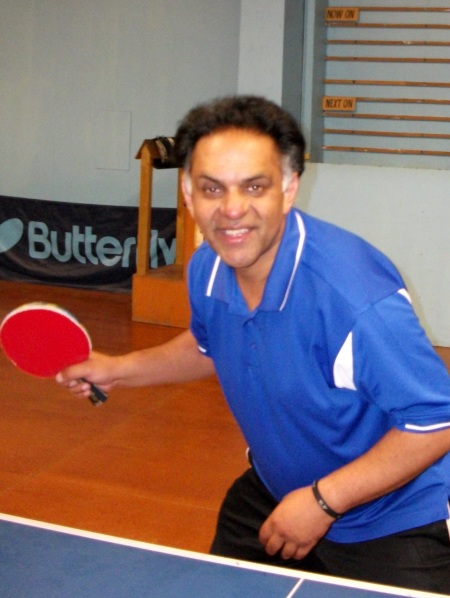 Depak Patel is a Empire Premier 1 player and a ITTF level 1 coach. He was born in the town of Pardi in the state of Gujarat (India). When he was 3 months old the family immigrated to England. After a 3 month journey by ship they settled in Leicester, the largest city in the East Midlands.

Depak played football (left winger) at school from age 10. Among his team mates was Winston White (right winger), who was to play professionally for Leicester and several other clubs (1976-93) making 529 appearances and scoring 61 goals. Playing for a rival school team was Gary Lineker (striker), who went on to played 80 times for England (48 goals). Depak was in the football team that were the Midlands Asian Students 5 a side Champions. He is a supporter of both Leicester City and Chelsea Football Teams.

Depak started playing table tennis at the local youth club at age 13. A teacher at his high school encouraged him to go to a Saturday coaching group. He joined Abbey Table Tennis Club and started off in Division 15 which his team won in his first season (1976). Depak progressed through to Division 4 before he moved to London. There he joined Ashford Table Tennis Club where he played Division 1 in 1988/89 and 1989/90. The Club won the British League (1988/89) with a team full of internationals including the Belgian, Jean-Michael Saive (The future European Men’s Singles Champion in1994 and World Number 1) and New Zealander Peter Jackson. Depak won the National Asian Students Table Tennis Singles, Doubles and Mixed Doubles in 1981 and 1984.

Depak also played cricket. He played for the Universal Cricket Club at 14 in the same team was his older brother. Depak was in the team that won the Leicester Liger Festival of Cricket Tournament (1976). His team included 4 Indian test players including Dilip Doshi who was a friend of his older brother in India. The other Indian test players were Ashok Mankad, Brijesh Patel and Madan Lal. The trophy was presented by Mushtaq Mohammad, the former Pakistan Cricket Captain. Depak’s best season was in 1990 for the Sunbury Village Cricket Club where he took the most wickets (75), had the most 5 wicket bags and had the most ‘Man of the Match’ awards during the season. Depak scored his only century (107 n.o.) when he carried the bat through out the innings for the Papatoetoe Cricket Club Presidents team (2000)

Depak moved to New Zealand in 1991 and has lived in Wellington and Auckland. Currently Depak plays and coaches at the Empire Club. He has won the Titan Club Singles twice (2007 & 2008) and the Empire Club Singles on 3 occasions (2004, 2009 & 2010). Depak was in the Wellington O45 Team that won the NZ Teams twice (2006 with Bryan McConnochie) and (2008 with Chris Talbot & Lindsay Ward). Depak was selected for the NZ Veterans team in the test against Australia (2007). He was the Captain of the NZ Over 50 Men’s Team at the Australian Veterans Tournament (2010). He has won 78 tournament titles including the North Island Over 40 Men’s Singles (2009). Depak said his best tournament wins were against Craig Dye and Thomas Samuelson. He is still very keen about playing table tennis and practises up to 4 times a week.