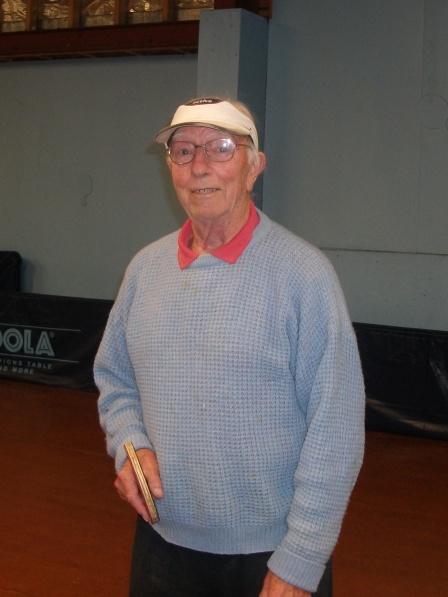 Reg was born in the town of Darwen (1927), which is near Blackburn in Lancashire, England. He left school at 14, and served a 7 year apprenticeship to qualify as a carpenter and joiner. After the war Australia, Canada, New Zealand and South Africa were looking for migrants. Reg wanted to go to South Africa but his older brother, Bill, advised him to go to New Zealand.

He travelled to Wellington, New Zealand by ship (6 weeks) and arrived in September 1949. His first job was at Swansons Joinery Shop (Newtown) and on his first day he meet the late Jack Blackmore (former Titan Club and Wellington President). They made up a table and played table tennis at lunch time and after work. Reg and Jack joined the St Thomas Club (Newtown) and played interclub for them in 1950-51.

In 1952 Reg married Yvonne. Work and family took precedence and he gave up table tennis for the next 20 years. He built his home in Island Bay in his spare time (1954) and still lives in the place today. Reg found time to play football for the Wellington Working Club for a few years. In 1966 Reg formed his own building company, R V Seddon Limited, and built many residential and commercial buildings.

When the Newtown Stadium was built (1971-72) Reg become a member of the stadium club, Titan. He played interclub again. Reg served on the Wellington Table Tennis Association Committee (1976). In 1981 the Wellington Association gave him free life membership of the stadium club, for his volunteer work in improving the lighting and installing the seating at the Stadium. Reg won veterans titles at the Titan Club Championships and at the Wellington Tournament. The highlight of his table tennis was playing for the NZ Over 50 Men’s Team at the 1988 Australian Veteran’s Tournament (Melbourne).

Today Reg is still active but does not play much table tennis. He has a fine singing voice and plays several musical instruments, including the piano, saxophone, clarinet, ukulele and mouth organ. May there be many years ahead for him.