You may remember Hui-Ling was heading over to Kiribati for the Oceania Junior Championships & Cadet Challenge. This finished on May 17 and the results are now in – with the TTNZ story here and the ITTF story here (or under the category here).

From the TTNZ page in the individuals section:

It was Hui-Ling’s turn to shine in the individual events finishing with 3 gold medals. A fantastic achievement in her first international competition. Hui-Ling overcame Katherine Li and Georgina Newton from Australia on her way to the final against team mate Zhiying and then partnered with Zhiying to take the Gold in the girls doubles against Rebekah Stanley and Katherine Li and together with Yang Lun overcame their Aussie opponents (Benjamin Gould and Rebekah Stanley) 11-2 in the 5th set in the final of the cadet mixed doubles.

Zhiying and Hui-Ling joined forces again defeating the Aussie pairing of Rebekah Stanley and Katherine Li in the final of the Junior Girls Doubles.

In all Hui-Ling won quite a stash of medals to take home:

A fantastic performance from Hui-Ling and congratulations to her from all of us.
She will next be starring Tuesday nights for the Titan Trail Blazers in winter interclub Series 1!

From the ITTFWorld flickr album, Hui-Ling (second from the left) getting used to wearing NZ rep black: 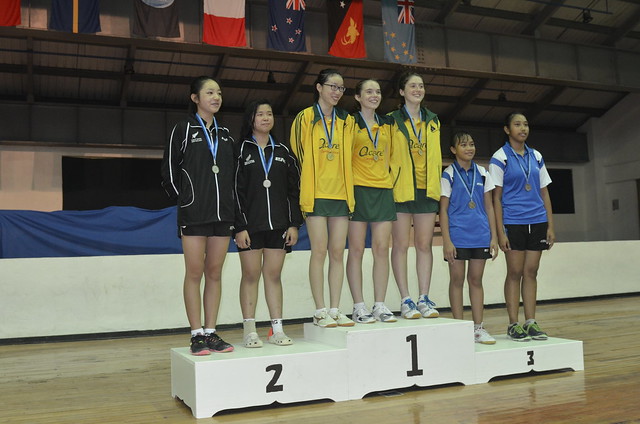