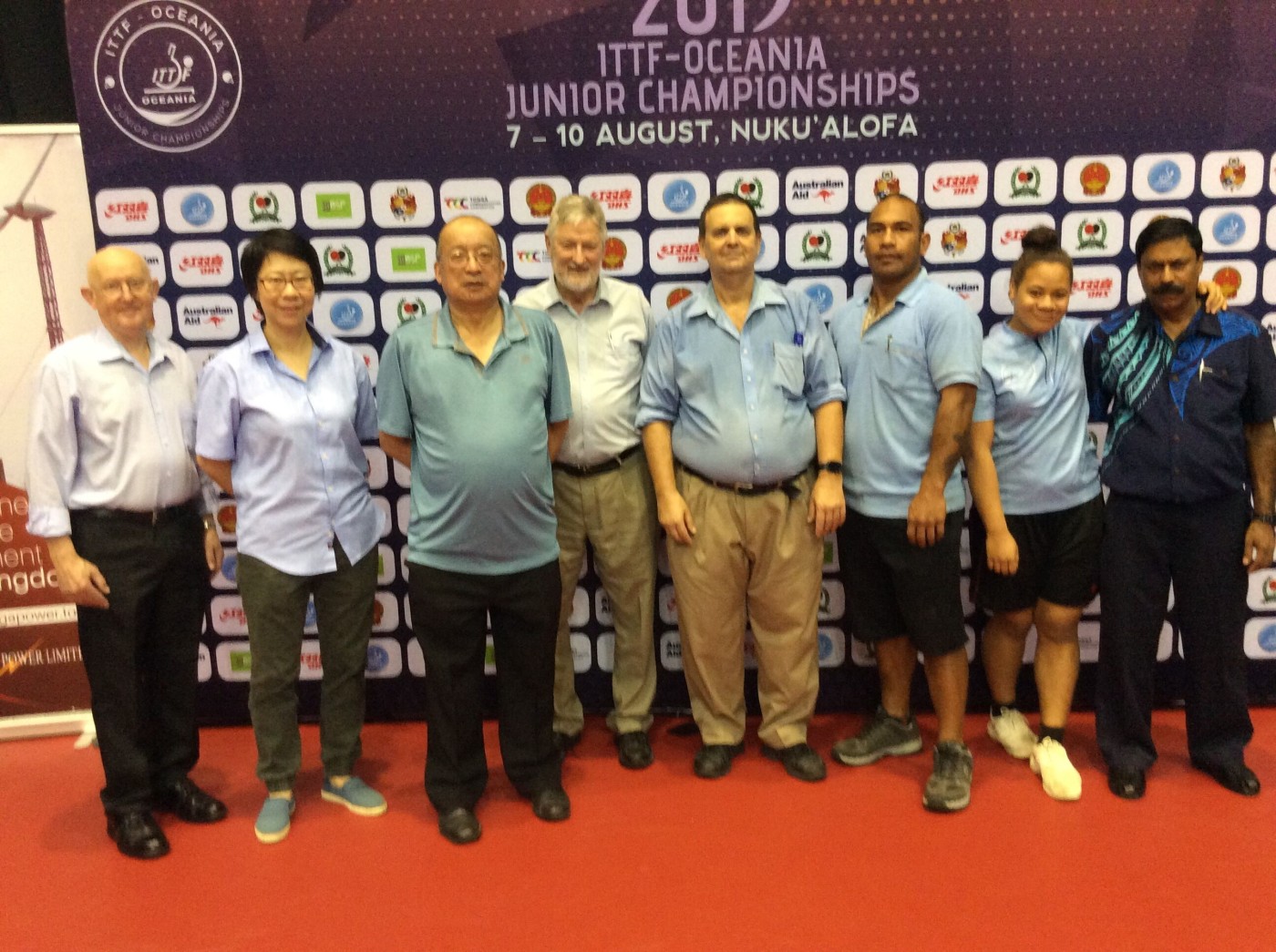 By Malcolm Wong on the 2019 Oceania Junior Table Tennis Championships – Nuku’alofa (7-10 August) at which he a part of tournament’s team of officials.

I arrived on Monday afternoon (5 August) on a Air New Zealand flight from Auckland to Fua’amotu International Airport, Tonga.  Siaoski Faka’osi (Tournament Director) was there to meet me. His day job is Team Operations Coordinator for the Tonga Rugby Union and he has been to the last 2 Rugby World Cup as a Tongan Official. He transported me to the Atele Indoor Stadium where the 3rd Elevate Performance Training Camp (4-6 August) for Fiji (4) and Tonga (6) juniors was being run by Patrick Wuertz (former Oceania High Performance Officer).

There are three television channels with NZ, Australian and USA news in the morning. In the evenings,  there was a channel showing Christian programmes, one in Tongan, and one showing Phillipines soap operas (in English). I had tea at Billfish Bar and Restaurant 10 minutes away.

On Tuesday morning I walked 45 minutes to the shopping area of Nuku’alofa. There were many road side stores on the walk in. I passed the Tanoa International Dateline Hotel (124 rooms) where the Australian players and coaches were staying. The centre of Nuku’afola had small shops and cafes. I brought some baseball caps, T shirts and fridge magnets at the Talamahu Markets, which also sells fruit and vegetables, handicrafts etc. I had lunch at Friends Café. The weather is cool and I did not have a problem with mosquitos. I saw dogs roaming around but no cats. I took a taxi back to the hotel. The taxis do not have meters. I paid 10 pa’anga. The person at reception at the hotel said i should have only paid 7 pa’anga.

On Wednesday morning I had a early breakfast at the hotel and at 7.20am I caught the bus to the stadium which was about 30 minutes away. There was a opening ceremony at 9am for the 6 teams. There were 51 players from Australia (12), Cook Islands (3), Fiji (10), New Caledonia (3), New Zealand (10) and Tonga (13). The Overseas Umpires (4) were International Umpires Gary Warnest (AUS) and Malcolm Wong (NZL). Also National Umpires Narendra Lal and Lihua (Eva) Liang (FIJ). There were 5 local Umpires. They were  Jason Palavi, Luseane Pepa, Losaline Moala, Tevita (David) Fangufangu and Samuela Fungavai (All Basic Umpires). Neil Montfort (Assistant Referee – AUS) also umpired some matches. Play started 9.30am and finished about 10pm. I umpired 5 team matches.

There was bottled water, tea, coffee, biscuits and fruit in the officials room. Thanks to the volunteers that supplied the lunch and tea meals. Due to birds nesting in the top of the stadium there was a problem with bird droppings on the back of Court 1 and 2 occurring during play. Also a large dead bird dropped onto the back of court 6. This was quickly cleaned up by volunteers. While a NZ player mislaid his passport there is no need to paid for emergency documentation to travel back to NZ from Tonga – all you need is a letter from Air NZ explaining the situation. While there are no flights on Sunday you can be flown out in a medical emergency.

On Thursday the individual matches started at 9am and finished about 10pm. There were team finals at 2.30pm. I umpired the Cadet Girls match in which Australia beat New Zealand 3-0. I also umpired 10 individual matches. Friday had the same start and finish times. I umpired 11 matches including the Cadet Boys Doubles Final won by Nicholas Lum/Finn Luu (AUS) who defeated Isaiah Lee/Raymond Zhang (AUS) 3-1. The weather was much warmer the last 2 days of the tournament.

Saturday was the short day (6 rounds) with matches starting at 9am and finished 1.30pm, followed by the medal presentations for teams and individual events.  In the last match to finish Nathan Xu (NZL) prevented a Australian clean sweep by winning the Junior Boys Singles final 4-3 against Lee Yonghun (AUS).  The Fiji team left after the presentation to catch their plane home. The Cook Island Team were staying on in Tonga for a couple of days.The Australian, New Caledonia  and New Zealand players, coaches, managers, and officials had tea at the Emerald Hotel before catching a bus to the airport.  It was an enjoyable tournament and the people were friendly.

This was my first trip to a South Pacific Island Country. Thanks to Tonga Table Tennis and their volunteers. And the Referees, fellow umpires and Ryan Riegand (ITTF –  Oceania) who ensured the tournament ran on time. Also thank to the staff at the Villa Ishadora Hotel.